View our roofing services Get in touch today

With over 20 years of experience in the roofing industry, we are proud to have built up a fantastic reputation with our customers. We strive to provide the highest level of service to each customer, for projects big and small, but don’t just take our word for it! Read through some of our testimonials to find out what our past customers have to say about us. We serve clients throughout Essex, London and beyond, and are happy to help with any enquiry. 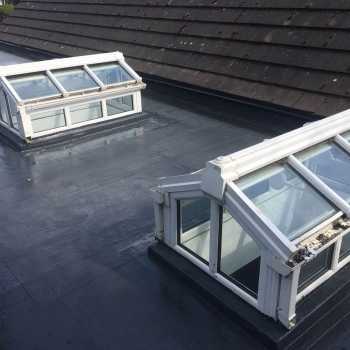 Recently we carried out a flat roofing project at Goldings Church in Loughton, where unfortunately they were experiencing multiple areas of water ingress, upon inspection of the existing flat roof coverings we found a torched on felt system that had been poorly installed, large amounts of ponding water due to not enough fall on the existing flat roof.
After seeing the existing problems we decided that due to an inadequate fall not letting the water run away that the existing felt system was not the right system for this particular project. So we called in Spencer from Kemper System, carried out a joint inspection of the roof area and we agreed that the best way forward for this project was to use the Kemper 2K System which can spend its entire lifetime submerged underwater and remain in a water tight condition.
So we swept down and cleaned the existing roof area, installed a recovery board and then the Kemper 2K system. So by installing this system we managed to avoid the expense of removing the existing felt, plywood system including skips and then renewing all the timber work & new roofing system.
So we have managed to supply a new Kemper System, there are now no more leaks and Goldings Church can now start to use the rooms again and we brought the project in under the planned budget.
A big Thank You to Spencer for all your help with this.

We would like to confirm that UK Roofing Specialist Ltd have been one of our preferred sub-contractors, working on various projects ranging from £10,000 to £160,000 with various different roofing systems including pitched roof slating and tiling, lead works and liquid systems. One project in particular.

The Old Neckinger Estate project was one of our larger projects and for this particular one Redland tile manufacturers have nominated UK Roofing Specialist Limited for an award for the excellent standard of workmanship, also the project was brought in on time and within budget.

We continue to work with UK Roofing Specialist Limited and have no problem in recommending their services.

We were very impressed with your operative, his efficiency, friendliness and helpfulness and will have no hesitation in recommending your company to any of our friends who need similar work doing on their homes. Once again, our thanks

We were very impressed with your operative, his efficiency, friendliness and helpfulness and will have no hesitation in recommending your company to any of our friends who need similar work doing on their homes. Once again, our thanks

I received a phone call this morning from the surveyor at One Housing, he confirmed that he was very pleased with the works that were carried out at the above address and he also commented that what could have been a problem job was managed and dealt with in a very professional manner by your company. He wishes for me to pass on a big thank you and well done.

We have been working with UK Roofing Specialist for the last three years. We only ever employ reputable tradesmen who are recommended to me. Likewise we would not recommend a tradesmen or company to anyone else unless we know they work to a high standard. UK Roofing Specialist do provide an excellent and professional service, ranging from changing one slate to replacing a new roof on a block of flats. We have used UK Roofing Specialist on numerous jobs, which as with any job, may not always go to the original plan. JK are never phased by any extras that they are asked to do and are willing to discuss all stages of the work with me.

We deal with UK Roofing Specialist on a daily basis asking them to cover all of the roofing requirements for the various properties in our portfolio.

All of their employees are courteous, hard working and prompt. They are willing to go that extra mile to keep the client happy to get a job done.

We would have no hesitation in recommending UK Roofing Specialist